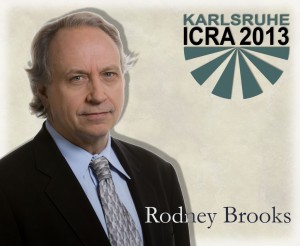 At Rethink Robotics we have spent the last few years developing a new class of industrial robot.  Rather than being evaluated on speed, precision or repeatability, our robot, Baxter, is about flexibility, adaptability and ease of use.  It has built in safety and common sense behaviors, and is very inexpensive.  An ordinary factory worker can learn in a few minutes how to train it for new tasks.  The robot is aware of its surroundings and understands certain classes of objects in the world. The robot is the interface and it is trained at a task level through a person moving its arms and showing it objects.  It is a collaborative robot and can easily adapt to people changing the world around it, or even stepping in and doing part of its task themselves.  The Baxter robot is now in mass production and being sold to end-user customers.

Professor Rodney Brooks is the Panasonic Professor of Robotics (emeritus) at MIT. He is a robotics entrepreneur and Founder, Chairman, and CTO of Rethink Robotics, Inc.  He also has a collection of formers. He is a Founder, former Board Member, former Chairman, and former CTO (1991 – 2008) of iRobot Corp (Nasdaq: IRBT), which has delivered over eight million consumer robots, and over four thousand military robots. Dr. Brooks is the former Director (1997-2007) of the MIT Artificial Intelligence Laboratory and then the MIT Computer Science & Artificial Intelligence Laboratory (CSAIL). In his 27 years on the active faculty at MIT and Stanford he carried out research in robotics, developing the behavior-based approach to robotics, developed the first mobile robots that could interact with people, the first humanoid robots in the United States, and made basic contributions to computer vision and artificial life, and was active in developing technology for planetary rovers.  He supervised 27 wonderful PhD’s and is eternally grateful for those experiences. Dr. Brooks is a Member of the US National Academy of Engineering (NAE), a Founding Fellow of the Association for the Advancement of Artificial Intelligence (AAAI), a Fellow of the American Academy of Arts & Sciences (AAAS), a Fellow of the American Association for the Advancement of Science (the other AAAS), a Fellow of the Association for Computing Machinery (ACM), a Corresponding Member of the Australian Academy of Science (AAS) and a Foreign Fellow of the Australian Academy of Technological Sciences and Engineering (ATSE). He received his PhD from Stanford in 1981, in Computer Science, and before that bachelors and masters degrees in pure mathematics at the Flinders University of South Australia.  Early in his career he held post-doctoral positions at Carnegie Mellon University and at MIT.