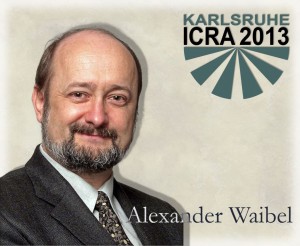 As humanoid robotics is coming of age and a growing number of mechanical functions become possible, a robot’s perceptual and cognitive functions continue to grow in importance and R&D focus. While perceptual abilities of machines generally still lag behind human performance, machines already exceed human capabilities in areas where human cognitive limit our performance.  For example, machines could theoretically handle hundreds of languages and process vast amounts of information on the Internet.  Can future Humanoid Robotic assistants (in addition to handling mechanical chores) perhaps provide language and cultural support in a seamless and natural fashion?

In this talk, I will present results from our efforts to make this dream become reality.  We will discuss and demonstrate various multi- and cross-lingual communication and interpretation devices and services that we have deployed into use already, including multilingual dialog systems, pocket speech translators on smartphones, and automatic simultaneous interpretation services.  I will then discuss the many open issues remaining from basic performance issues in speech and language processing, to providing better and more natural forms of deployment.

Depending on scenario and interaction style, rather different strategies appear to be effective, requiring different degrees of sophistication of the user interfaces, speech, translation and dialog processing.

Dr. Alexander Waibel is a Professor of Computer Science at Carnegie Mellon University, Pittsburgh and at the Karlsruhe Institute of Technology, Germany. He is the director of the International Center for Advanced Communication Technologies (interACT), a joint center at eight international research institutions worldwide.  The Center develops multimodal and multilingual human communication technologies that attempt to improve human-human and human-machine communication.  Waibel’s team developed and demonstrated the first speech translation systems in Europe and the USA in 1990/1991 (ICASSP’91) and the first simultaneous lecture translation system in 2005, and Jibbigo, the first commercially available speech translator on a phone in 2009 (www.jibbigo.com).  Dr. Waibel was one of the founders and chairmen of C-STAR, the Consortium for Speech Translation Research in 1991.  Since then he has directed and coordinated many research programs in the field in the US, Europe and Asia.  He serves as director/general coordinator of EU-Bridge, a large scale multi-site European research initiative aimed at developing speech translation services in Europe and of several US programs aimed at improving language portability and performance, and of Babel-Radical, a large scale US initiative aimed at improving language portability in speech recognition.

Dr. Waibel has received several awards for pioneering work on multilingual speech communication and translation technology.  He has published extensively in the field, received several patents and built several successful companies.  The latest of these ventures, built the world’s first speech-translator on a phone, Jibbigo, and deploys its technologies in humanitarian and disaster relief missions.