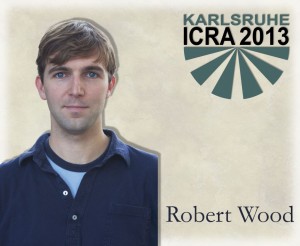 As the characteristic size of a flying robot decreases, the challenges for successful flight revert to basic questions of fabrication, actuation, fluid mechanics, stabilization, and power - whereas such questions have in general been answered for larger aircraft. When developing a flying robot on the scale of a common housefly, all hardware must be developed from scratch as there is nothing “off-the-shelf” which can be used for mechanisms, sensors, or computation that would satisfy the extreme mass and power limitations. This technology void also applies to techniques available for fabrication and assembly of the aeromechanical components: the scale and complexity of the mechanical features requires new ways to design and prototype at scales between macro and MEMS, but with rich topologies and material choices one would expect in designing human-scale vehicles. With these challenges in mind, this talk will present progress in the essential technologies for insect-scale robots and the first flight experiments with robotic insects.

Robert Wood is the Charles River Professor of Engineering and Applied Sciences in Harvard’s School of Engineering and Applied Sciences and a founding core faculty member of the Wyss Institute for Biologically Inspired Engineering. Prof. Wood completed his M.S. and Ph.D. degrees in the Dept. of Electrical Engineering and Computer Sciences at the University of California, Berkeley. He is founder of the Harvard Microrobotics Lab which leverages expertise in microfabrication for the development of biologically-inspired robots with feature sizes on the micrometer to centimeter scale. His current research interests include new micro- and meso-scale manufacturing techniques, fluid mechanics of low Reynolds number flapping wings, control of sensor-limited and computation-limited systems, active soft materials, and morphable soft-bodied robots. He is the winner of multiple awards for his work including the DARPA Young Faculty Award, NSF Career Award, ONR Young Investigator Award, Air Force Young Investigator Award, Technology Review’s TR35, and multiple best paper awards. In 2010 Wood received the Presidential Early Career Award for Scientists and Engineers from President Obama for his work in microrobotics. In 2012 he was selected for the Alan T. Waterman award, the National Science Foundation’s most prestigious award. Wood is leading the NSF-sponsored Expeditions in Computing “RoboBees” project that has the goal of developing a colony of autonomous robotic bees. Wood’s group is also dedicated to STEM education by using novel robots to motivate young students to pursue careers in science and engineering.