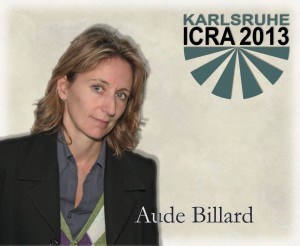 Teaching robots to do tasks is a more challenging task than it may appear at a first glance, even when these robots resemble us. In this presentation, I will shed some light on some of the major challenges we face when transferring skills from humans to robots.
Imitation learning is not just play and record. A key component of learning is the ability to generalize. In imitation learning, generalization must come from very few examples to ensure that the length of the training phase is bearable to the human teacher. Most approaches, however, discard erroneous training examples, hence forcing the human teacher to be very skilled at the task, and to repeat the tasks numerous times until enough successful demonstrations have been gathered. There is an advantage to include errors in the training to ensure robustness and better generalization. I will hence discuss some promising avenues in learning from failed demonstrations.

Traditional planning approaches seek to find the optimal solution. The strength of human control, however, lies in that we are capable of performing the same tasks in multiple ways, several of which being sub-optimal. Feasibility is hence more important than optimality.  It offers the possibility to rapidly switch across control strategies in the face of perturbations. Modeling the variability with which humans perform the same task provides robots with a notion of feasibility regions in sensori-motor space. Over the years, we have sought to provide robots with controllers that allow instantaneous reactions to perturbation, mimicking humans’ immediate response in the presence of danger. I will describe application of such fast and robust adaptation for compliant control during manipulation of fragile objects and for performing sports, such as when playing golf with moving targets and when catching fast flying objects.

Professor Aude Billard is head of the Learning Algorithms and Systems Laboratory (LASA) at the School of Engineering at the EPFL. She received a M.Sc. in Physics from EPFL (1995), a MSc. in Knowledge-based Systems (1996) and a Ph.D. in Artificial Intelligence (1998) from the University of Edinburgh. She was the recipient of the Intel Corporation Teaching award, the Swiss National Science Foundation career award in 2002, the Outstanding Young Person in Science and Innovation from the Swiss Chamber of Commerce and the IEEE-RAS Best Reviewer award. Aude Billard served as an elected member of the Administrative Committee of the IEEE Robotics and Automation society for two terms (2006-2008 and 2009-2011).  She was a keynote speaker at the IEEE International Symposium on Human-Robot Interaction (ROMAN) in 2005, general chair for the IEEE International Conference on Human-Robot Interaction in 2011 and co-general chair for the IEEE International Conference on Humanoid Robots in 2006. Her research on human-robot interaction and robot programming by demonstration was featured in numerous premier venues (BBC, IEEE Spectrum) and received seven best paper awards at major robotics conferences, among which ICRA, IROS and ROMAN.