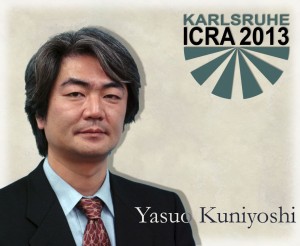 Despite the vast advancement of methodologies and computational power, robot intelligence is still far from human level, leaving “hard problems” such as meaning and consciousness unsolved. Understanding the fundamentals of human intelligence is becoming more and more important. In this talk, I will first show that physics of human-like body in action already provide certain information structure which can set the natural basis of categorization and meaning. Then, I will show a principle of autonomous exploration that reveals the embodied information structure, aka. body affordances. Coordinated motor patterns consistent with the embodiment emerge from multiple chaotic elements coupled through body-environment physics.

In humans, the above principle drives early motor development. And the resulting sensory-motor information can be captured by self-organizing neural circuits, forming the basis of cognitive structure. In order to investigate this hypothetical scenario, we constructed a simulation model of a human-oid fetus. It consists of a musculo-skeletal body, the environment within uterus, a neural model of spine and medulla, and a self-organizing neural network modelling sensory and motor cortical areas. A series of experiments revealed that with very little “innate” neural circuits, the model acquires various behaviour patterns that comply with its embodiment, and the neural model self organizes to capture the information structure.

In 2012, a new five-year project called “Constructive Developmental Science” has started. It is a collaborative effort by roboticists, psychologists, medical scientists, and “Tojisha”, the researchers who investigate their own developmental disorders as internal observers. The fetal development simulation plays a core role there as a platform for integrating the interdisciplinary data and experimenting on the effect of various early genetic/environmental conditions on the courses of development. The project aims at revealing the fundamental principles of human development and new understanding of developmental disorders.

Yasuo Kuniyoshi is a Professor at the Department of Mechano-Informatics, School of Information Science and Technology, The University of Tokyo, Japan. He received B.E. in applied physics, and M.Eng. and Ph.D. in information technology from the University of Tokyo in 1985, 1988 and 1991, respectively. From 1991 to 2000, he was a Research Scientist and then a Senior Research Scientist of Intelligent Systems Division, Electrotechnical Laboratory, AIST, MITI, Japan. From 1996 to 1997 he was a Visiting Scholar at MIT AI Lab., being a member of “ZOO” hosted by Prof. Rodney A. Brooks. In 2001, he joined the University of Tokyo as an associate professor. Since 2005 he has been a Professor there. Since 2012 he has been serving as Director of Social ICT Research Center, School of Information Science and Technology, The University of Tokyo. Also since 2012, he has been jointly appointed as Director of RIKEN BSI-Toyota Collaboration Center (BTCC). His research interests include constructive developmental science, emergence and development of embodied cognition, and humanoid robotics. He is the author of over 500 technical publications, editorials and books. He received Outstanding Paper Award from International Joint Conference on Artificial Intelligence, Best Paper Awards from Robotics Society of Japan, Sato Memorial Award for Intelligent Robotics Research, Okawa Publication Prize, Gold Medal of Tokyo Techno Forum21, and other awards. He is a member of IEEE, Science Council of Japan (affiliate member), Robotics Society of Japan, Japan Society for Artificial Intelligence, Japanese Society of Baby Science, and other societies.